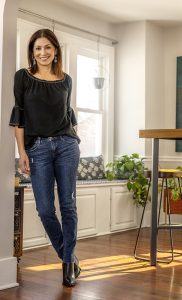 Jenn is a veteran of the spa and beauty industry with over twenty-five years of experience in the field.

During her career, she has worked for Marriott International’s Spa Division and directed both resort and free-standing day spas. She is also the former Spa Director at Pinehurst Resort in North Carolina where she managed the resort’s 31,000 sf Forbes Four-Star spa.

Jenn also spent several years within the Aveda Network as the Retail Director for the Aveda Lifestyles Stores in the Denver-metro area and was the Esthiology Team Leader for the Aveda Institute, Minneapolis. Additionally, she held the post of Brand Manager for Sanitas Skincare and Cowgirl Skincare and in 2020-21, served as the National Educator for LaFlore Skincare.

Following a desire to learn more about how to care for those living with cancer, she traveled to Ireland in February of 2018, to become certified in Christine Clinton Cancer Care Touch Therapy and in 2014, was an International Spa Association Innovate Award Winner.

Originally from Hawai’i, Jenn also spent many years in Colorado living in the Boulder-Denver area. She holds an MFA in Writing from Naropa University in Boulder, Colorado and a BA in Art from the University of Hawai’i, Manoa.

In her free time she likes to cook, travel, walk her dogs and putter around in her garden.

Every product we carry gets vetted through our proprietary NO-BS filter before it hits the shelves so you can shop our cruelty-free beauty brands with confidence.

Everyone is welcome here!